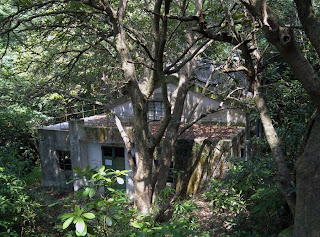 If you walk through the Lower East Side, take the right fork at the little dam and uphill another 500 meters along the steep slope of the valley, down below on your left you'll see this abandoned house.

There are abandoned houses all around Lantau. There's even a whole abandoned village along the coast just 40 minutes walk from Wang Tong. No one remembers who owns most of them. Somebody once claimed these homes, which makes me wonder why, in property-investment-mad Hong Kong, no heirs have come along to reclaim any for redevelopment. Maybe they were squatters to begin with, without title.

This house, though deep in a glen and obscured by dense forest, is in a lovely location next to the stream, with enough level area--if you cleared the trees--for a substantial garden. It's a single-story bungalow with a loft, made of whitewashed brick and concrete. There's a barn of sorts, possibly a former pigsty, in the back. The house is still intact; only a bit of the barn has collapsed. It would make an ideal artist's retreat.

One day I was walking with Uncle Six (whom you'll meet later) to do some repair work on the village water tank upstream. He's getting pretty old and though not native to Wang Tong, has lived here almost forever. I asked him whether the house belongs to anybody.

"I don't know anymore," he said. "Used to be a couple named...I don't remember...I think Chan. They were very old. I think their children moved away. When they died, no one came to take over. No one lived there since."

"Oh...thirty, thirty-five years ago. Before the pipe." He was referring to the water pipe which leads from the water tank halfway up the valley down into the village.

Uncle Six shook his head. His expression looked sad. Those were the old days, I guess, when people worked hard to live off the land, and came and went without much notice.

The house remains, populated only by ghosts.
All contents © Larry Feign Posted on Thursday, July 30, 2009