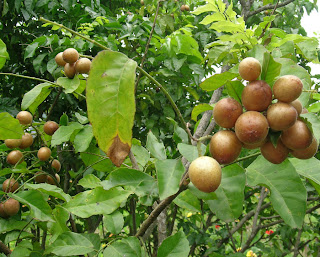 Ha! You expected a racist joke. Let's talk fruit instead.

Wong pei (黃皮) are in season all around the village. The name translates literally as "yellow skin", though the dictionary claims the English name of this berry-like fruit is wampee. They're about the size of large grapes, with thin leathery skins.

They're not my favorite Chinese fruit mainly because the skins are hard to peel, so you're supposed to just pop them into your mouth and spit out the skin later. I know some people do that with grapes, but I've always found it to be more effort than it's worth.

However, it is worth the trouble with wong pei. The flesh inside has a satisfying squishy texture a bit more rubbery than grapes and just as juicy. Once you bite down your mouth is knocked awake with a sweet, tangy flavor like sugary orange-lemon-lime punch.

Wong pei are native to southern China and they're one of the most popular fruits among local people, so it isn't surprising to find the trees in many gardens and in the wild. Each tree will give you many hundreds of fruit. Our current garden was once a small fruit orchard, and we've kept as many of the original trees intact as possible. We have lychees, longans, sugar-apples (known as faan gwai lychee: literally "foreign devil lychees"...they're not native to China), and pomelos, but the original farmers knew their market and planted mostly wong pei. We're reaping that abundance right now. The tree in the photo is next to our front gate.

Like I said, they're not my favorite. That's Western tastebuds for you. I can't wait for the syrupy-sweet lychees to ripen later this summer.
All contents © Larry Feign Posted on Saturday, July 18, 2009