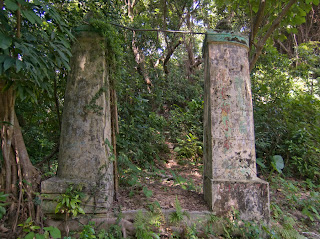 When we lived in our previous house in the village, we hired men with shovels and a jackhammer to dig deep and turn the soil in the garden. To our amazement they discovered pieces of porcelain dishes, clay pots and several old bricks buried deep in the ground. We called a neighbor, an archaeologist whose job is to examine building site excavations for signs of archaeological treasures. He gathered some of our samples and brought them home for examination. Could they be remnants of some ancient Ming Dynasty settlement? Or at the very least maybe they belonged to someone who had farmed this spot a hundred years ago? They were down pretty deep; they must have been quite old.

The next day we learned the result: they were cheap dishes like you could buy at any Chinese department store. Most likely there had been a house on that spot which, along with all its contents, had been demolished and the rubble mixed into the soil before building the new house back in 1980. Oh well.

Wang Tong does have a few sites of historical interest, though. There's a disused traditional Chinese style pigsty left over from before pig farming was banned here in the 1980s. There is the watchtower on top of Butterfly Hill. And then there's the old restaurant.

When you walk toward the waterfall, at the top of the steepest part of the path, on your right are the remains of an entrance gate, which you can see in the photo. Some of the original green paint is left. The red Chinese characters are still readable and say "Sea food snack restaurant". My wife thinks the tree on the left was deliberately planted to frame the gate in a beautiful and auspicious manner. Walk through the gate and about 50 yards up the hill the only remains of the restaurant you'll find is part of its foundation.

Locals think the restaurant opened in the 1930s. Back then all of Lantau Island was a forgotten, remote backwater which may as well been the far side of the Moon. There were a few small fishing villages and nothing of much interest to tourists. The only way to get here was by a slow, infrequent ferry. Until the late 1950s there were no roads anywhere on the island. The main thoroughfare between the north and south of Lantau was a footpath which passed right through Wang Tong. It was paved with cobblestones, some of which can still be seen along the edges of the current footpath. The restaurant was likely a stop-off point for travelers at the end of the long hike.

Picture what it must have been like back in 1950. You just walked for two or three hours from Tung Chung, a cluster of tiny villages where pirates once lived. The cobbled path led you along the coast, up into a long valley and over a steep pass. Just one more hill to go and you'll be in Mui Wo. At the top of that small hill is a little seafood restaurant offering fast food and a view. What a nice place to have a little meal before trekking the last mile to the ferry pier and the end of your journey.

It would have been a stunning location. Today the hilltop where it stood is covered with dense forest, but in fact that wasn't the natural state of things on Lantau Island. Most of the island had been deforested by local inhabitants for fuel and building materials and from hill fires accidentally set by ancestor worshipers in various hillside cemeteries. So chances are that the restaurant patrons had a view unobstructed by trees. On one side they would have been able to see the Silvermine Waterfall. On the other side they'd have had a panoramic view across Wang Tong valley, likely covered with small farms, over Silvermine Bay, of the harbor and other islands, with western Hong Kong island in the distance. Judging by the quality of workmanship on the pillars, it must have been an elegant restaurant, probably a great place to linger over a bowl of noodles and a pot of tea.

In the late 1950s the government put in a paved road connecting the north and south of the island, which terminates at the ferry pier about a mile from Wang Tong. The old cobblestone footpath was no longer a vital throughway and the restaurant would have lost most of its patronage. So it isn't surprising that it closed in the 1960s.

No one knows who owned it and the site has never been put up for sale. There have been no restaurants in Wang Tong ever since. If you want noodles, you need to walk about a third of mile outside the village to the Sun Lok Restaurant, whose dishes are about as old and cracked as the ones we dug up from our garden.