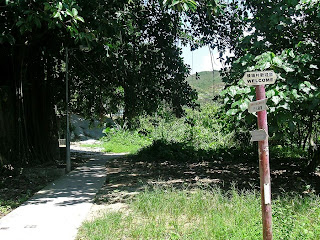 It was hot. 33 degrees (91° Fahrenheit) by ten o'clock in the morning. The ground all through the village was still so gorged with water from the typhoon that it shed moisture upwards like a simmering pot. As soon as I opened the door my forehead started drooling sweat.

Cathy was at work in central Hong Kong. One kid was out for the day and the other was, like a typical mid-summer bored teenager, sleeping in until at least noon. Our housemaid was in town to renew her visa. I was alone in the house.

I've worked at home for over 25 years, wherever we've lived. People always say "How lucky! You get to work at home!" On a day like today I think: How lucky they are. They have people around they can talk to and have lunch with.

Usually I crave the solitude when I work, but sometimes it gets to me. It's the irony of the artist everywhere: in order to create the words or pictures that we hope will connect us with other people, we need to be alone. Back in 1989 I begged the editor of the newspaper I worked for as a cartoonist to let me have a desk. When one finally became vacant six weeks later his secretary called me. I moved in with a supply of drawing materials and discovered that I was utterly unable to work in such an environment. I learned that journalists spend ninety percent of their day chatting and gossiping. A bit of that was entertaining, though I often didn't know the person over in Business or Special Supplements they were sneering about. As soon as I said excuse me, I need to concentrate and do my drawings, people took it as a slap. After two weeks I surrendered my desk. That was the last time I ever worked in someone else's office.

At times the craving for company is excruciating, especially on a day like today when I was all alone in a big house in a tiny village where no creatures were moving. Even the few birds were just passing through, high overhead. I felt like the last human being after the plague.

I went for a walk to see who might be around. I left the house for the main footpath, turned the corner for the more densely developed Lower East Side of Wang Tong, hoping I might run into somebody. Someone I could photograph and introduce you to on this page.

Not even the rubbish collection ladies were around, and I really want you to meet them. The Wang Tong Stream was clear and empty. The fish were hiding out of sight in the shadows, away from the heat.

I kept walking, heading inland, past our old house, which the new owners had painted white. Across the stream Mrs. Suen waved to me before disappearing inside and shutting her door. I walked all the way to the little dam at the end of the village. Sometimes you find kids splashing around or fishing in the little swimming hole formed by the dam. Nobody.

On the way back a woman I didn't recognize passed me on her bicycle. All the way home she was the only other person I encountered.

Sometimes Wang Tong Village is my Paradise on earth. Sometimes it feels like a gorgeous prison.

The photo above tells it all. The sign at the top says in Chinese: "Welcome to Wang Tong Village". Welcome...somebody...anybody!
All contents © Larry Feign Posted on Tuesday, July 21, 2009