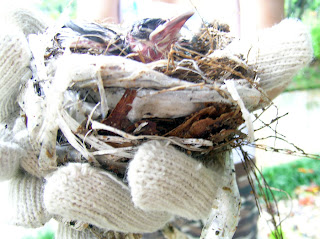 Last night we had a direct hit from Typhoon Molave, which struck Hong Kong at midnight. 140 km/h (87 mph) winds flattened the ginger fields and uprooted plants. We prepared by supporting our most vulnerable trees with rope attached to the garden fence. One papaya tree nearly fell over, and some of those almost-ripe pomelos dropped like bombs, but otherwise we escaped damage.

We also escaped burglary. Burglars often choose nights like these, with no witnesses out for midnight strolls and the the deafening noise of wind and driving rain covering the sounds of breaking locks and crowbarred windows. At 1:15 a.m. our housemaid got up to get a drink and saw two men in black coats just outside. They saw her, leaped over the fence and ran away. This morning the police told us a house on the other side of the village wasn't so lucky. The thieves got away with a horde of cash.

But the one who had the closest call last night was this baby bulbul in the photo. I found it on the ground beneath a tree, motionless, its wings askew. Cathy thought it was dead, but then we saw it breathing. It had obviously been blown out of its nest. But from which tree? We weren't aware of any nest in the tree directly above, but knew there was a bulbul nest in a tree around 20 yards away. How to return it there? And what if it didn't really belong to that family?

Fortunately Cathy remembered there was an abandoned nest in a bush elsewhere in the garden, comically constructed from twigs and white nylon packing twine. She put on some gloves, fetched the nest, then gently lifted the protesting baby into it. She placed the nest in a branch of the tree below the other bulbul nest.

The photo shows Cathy holding the nest with the baby in it. Note the white nylon twine the birds wove around the nest, as neatly as a birthday present.

An hour later we went to check. The baby was standing and crying on a branch next to the nest. Across the garden we saw adult bulbuls chirping and hopping around on the fence in an agitated manner. Having watched countless generations of bulbuls produce families outside our windows wherever we've lived in Wang Tong, we thought their behavior looked very much like upset parents.

Another half hour later the baby was back on the ground. Concerned, Cathy got her gloves and was about to pick it up again when the baby spread its wings and flew away.

We're no longer worried. Maybe this baby had to leave the nest prematurely, but we're sure it will find its way in the world.

I hope it comes back to visit. I hope those burglars don't.
All contents © Larry Feign Posted on Sunday, July 19, 2009