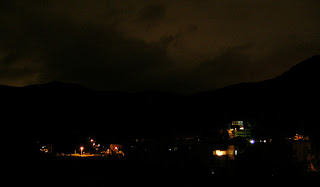 Things are hopping in the old village tonight!

Something about puddles brings out the impresario in frogs. After several downpours during the day left behind lots of puddles on top of already-saturated ground, the frogs have come out singing with such bombast as if Wagner himself was conducting.

First are the altos, whose song sounds like the squeak of rubber soles on a marble floor, repeating over and over and over. A basso continuo is provided by bullfrogs in a syncopated wail which sounds something like a rubber squeeze horn with a stomach ache. In the middle is an improvisation of tenors which sound like a cross between kazoos and people spitting, not sticking to any rhythm. It's like an off-key jazz opera which goes on all night, at a volume that can make you too crazy to sleep if you pay attention.

On top of the frogs is a sonic blanket of the trill of crickets; it's summer, after all.

Then the dogs start barking. One neurotic mutt on one side of the valley might bark at a cat, and then every other dog in the village feels obliged to comment like drunks in a bar. Some dogs seems to be quite unpopular among their peers. Any time the guy at the end of the Upper West Side takes his three dogs for a midnight walk, every other canine along the way, including ours, bursts into insanity.

If you're lucky you'll hear a barking deer, a miniature deer native to south China. Not that it's a pretty sound; it's a mournful bay like a moaning dog. Yet it's nice to know they're there. Not so far tonight, though. In this hot weather, perhaps the barking deer have moved to higher altitude.

Humans contribute little to the noise: the rattle of air conditioners and the occasional ding of a bicycle bell.

If you're looking for a wild and noisy night out you might consider the bars of Wanchai or Lan Kwai Fong. Or you might pay a visit to Wang Tong Village.
All contents © Larry Feign Posted on Sunday, July 26, 2009