Snakes in the Garden (again) 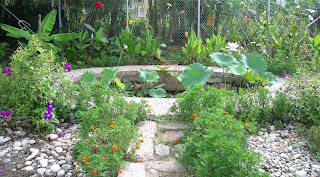 Our gardener phoned me. "Sir! Snakes in the lily pond!"

Did she say snakes...with a second S?

At the end of our garden we built a small pond and planted water lilies. The pond is fed by a little trickle of a stream at the edge of the property, entering through an opening in the back and exiting through the side, where it flows into the vegetable farm next door. The pond quickly became home to scores of tiny fish and, within a few months, was filled with tadpoles. Usually you can find frogs of various sizes hanging out on a lily pad. One day we discovered two large turtles chilling out in there; the next day they had moved on. But this was the first time we'd had snakes in the pond. I called the police to send the snake squad and ran downstairs (unfortunately forgetting my camera; I took the photo of the pond this morning, mainly because a gorgeous lily had just opened)

Nothing brings out the primeval gut feeling that we humans are just animals than when you face a snake. Fear, revulsion, the urge to flee and an urge to kill all well up inside and the skin tingles with adrenalin. I've been face-to-face with a brown bear and armed muggers, but the fight-or-flight response is never so intense as when there's a snake in front of me. In this case, not one but two slender dark brown snakes were curled up in the pond, their narrow heads breaking the surface. One rose up and looked at us curiously. Then the other.

And then they started to dance. They curled around each other, uncurled, then curled again in the other direction. Were they playing? Was it a mating dance? Do snakes mate in the water? Whatever they were doing, I couldn't help but think that they looked like they were having fun.

The police snake catchers arrived. They said it would be difficult to catch them in the water, since they couldn't be pinned down, and in any case they looked like non-venomous water snakes. My wife arrived home early from work and joined the crowd. Just as we were discussing whether they might be rat snakes (also non-venomous), one languidly crawled up over the edge of the pond, turned away from us, then calmly crossed the stream and disappeared into the farm next door. The other must have snuck out the water inlet hole, because there was no sign of it.

In the year and a half since we moved into our new house, we've had numerous snake visits. During the construction, a Burmese python ("The biggest one I've ever seen in my life" said one of the construction workers, who grew up in the countryside), passed right through our future living room. After we moved in, one morning a rat snake, easily nine feet long, was resting in the shade outside the kitchen door. When it saw me it lifted its head and indignantly traveled across the garden, over the wall and into the wild ginger field on the other side. We've had several black cobras pop their heads out of holes in the wall. Those are the ones I really hate. They're poisonous and short-tempered. I've had more close encounters with cobras than I can count in my 18 years in Wang Tong.

The oddest snake incident occurred one evening when Cathy, my wife, ran in from watering the garden. "I nearly stepped on a snake!" She grabbed a flashlight and our snake identification book. Next to a papaya tree was a muscular snake curled up like a garden hose. It had a stunning pattern of black and white rings around the length of its body. It turned out to be a banded krait, uncommon in this part of China, and so venomous that its bite will kill an adult human in 8 hours. The police sent over a brilliant snake catcher, who used a flashlight and a bamboo stick to actually hypnotize the reptile. He then stunned it with a tap on the head, and did something I'd never dare: he picked up the living but woozy snake and tossed it into a bag. Kraits are a protected species, so he had no intention of killing it. It would be taken to a remote spot and released.

Lucky for those snakes I'm not Chinese and my wife isn't a snake eater. In our previous house on the other side of the village, whenever anyone shouted "Snake!" several local men would come running with sacks and bamboo sticks. They could name instantly the species of the snake, as well as the price per pound of its meat. Their goal: catch whatever it was alive, carry it home and drop it into a pot of boiling water.

When the two snakes scurried away after their brief romp in our pond I actually felt kind of touched. They'd enjoyed a refreshing mid-summer-day swim, perhaps a little afternoon delight, and gone back to work. Live and let live, even snakes.
All contents © Larry Feign Posted on Thursday, July 16, 2009