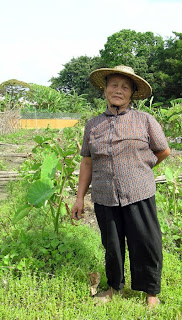 I smelled smoke. Looking out the window I saw the old lady pulling dried banana stalks onto a small bonfire in the middle of her farm plot next door. I went out to the balcony and called down to her in Chinese.

"Is it going in your windows?"

"Just a little bit to burn. I'll do it quickly." She smiled and waved. I waved back and said thank you.

I couldn't blame her. We were the newcomers in Wang Tong, only 18 years. She's been farming this field for over 30 years. In fact, I just learned that she's the one who introduced ginger to the valley. Meet Ah-Po, the last remaining farmer in Wang Tong.

Her family name is Lai, but everyone knows her only as Ah-Po, which means Granny. She and her husband moved from the Guangning region of Guangdong Province to Hong Kong and somehow ended up settling in Wang Tong. Back then, she remembers, there were hardly any houses. The valley was a patchwork of rice paddies and small farm plots. She remembers Yuen Fat, the previous owner of our land, planting his fruit orchard. The surviving trees are old and knuckly now.

Ah-Po and her husband supported themselves doing odd jobs on construction sites all around Lantau, including some of the first buildings in Discovery Bay. But one day they had the idea to plant ginger. All around Hong Kong you'll find old women sitting on the sidewalks holding wicker baskets filled with pungent, aromatic white ginger flowers, often with safety pins attached to sell as instant corsages for a dollar. If they could supply these women, they could make a good profit. So they planted a patch of ginger, then another, then more in neighboring villages. It was all open land; nobody knew who owned it, and even if they did know, the owners mostly didn't care. Every May the couple took leave from construction work to harvest the flowers. Ah-Po says it was indeed very profitable. Ginger needs no maintenance. In fact, it's almost impossible to get rid of. As the rice paddies went fallow, the ginger marched in like an army. The vast ginger fields of Wang Tong and neighboring Luk Tei Tong are her legacy.

She still harvests ginger, but most of her energy goes into her vegetable farm. She raises bananas, squash, bak choi... well, whatever's in season. That's her new taro crop next to her in the photo.

We weren't always so friendly with Ah-Po. To irrigate her vegetable farm she used to block the outflow pipe in the small dam at the upper end of the village so as to divert more water into a tributary running through the ginger field and into her farm. That left the main Wang Tong Stream deprived of water. Back then we lived on the Lower East Side, next to the stream, and it annoyed us to see it dry up like that. We sent the kids after dark to unblock the pipe. The next day it would be blocked again.

When we moved in to our current house and marked the borders of our land it turned out that it overlapped the corn section of Ah-Po's farm, which prompted intense negotiations. We had one or two arguments about ginger that our construction workers damaged. But once she saw what a plantaholic Cathy is, and how intensely serious Cathy was about creating a substantial vegetable garden, we gained respect in her eyes. Now she's Cathy's farming mentor, passing on her knowledge, and occasional seedlings, to another generation, not so young but eager nevertheless.

I don't know how old Ah-Po is. I pray that she's around for a long time to come. Some occasional banana leaf smoke in the window is a small price to pay for the beauty, the food and the link with the land that she provides for our village.
All contents © Larry Feign Posted on Friday, July 24, 2009