Hummers of the Footpath 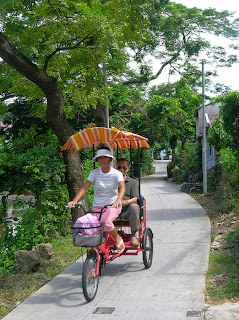 There is a growing menace on our thoroughfares, crowding out smaller vehicles, devouring parking areas, blocking traffic and endangering pedestrians. They're heavy, as clumsy as tanks and ridden mainly as status symbols. Yes, that's right, I'm talking about tricycles.

Most of Mui Wo, which includes four main villages, several minor ones and a few square miles of open fields, small farms and hills inbetween, is closed to motor vehicles. The 3000 people of the district get around on bicycles and foot to commute to the ferry pier and shops. Here in Wang Tong we have three narrow--and unnamed--concrete paths inside the village which all feed into one main track along the Wang Tong Stream (seen in the photo).

Kids here grow up on bikes. They ride in wicker baskets mounted on the crossbars of their parents' bicycles until they're old enough to ride their own. All are expert cyclists, without training wheels, by age 3. It's amazing how much a normal bicycle can carry. I've been known to carry a week's worth of groceries dangling from the handlebars, a new plastic deck chair tied to the rear rack, and several potted plants in the front basket, while talking on my mobile phone.

In the mornings there can be bicycle traffic jams as hundreds of cyclists from around Mui Wo converge to catch the morning ferries. There are occasional accidents, almost all caused by inexperienced cyclists--by definition, tourists from Hong Kong's urban areas. But otherwise things have been pretty harmonious along the cycle paths.

That is, until a couple years ago, when one of the local bicycle shops had the bright idea to start selling tricycles. They're completely impractical for Mui Wo. They take up most of the width of the pathways. When two approach each other from opposite directions it leads to standoffs while all other traffic, including pedestrians, comes to a halt. Heavily built, the driver's seats welded on too low for comfortable riding, with impractically small wheels and a single gear, they're torturous to ride up even a mild slope, and that's without a passenger. This leads to traffic pileups behind them as they strain their way forward. At the bicycle parking lot near the ferry pier, already overflowing by nine o'clock every morning, each tricycle takes up two spaces.

But what bothers me most about these Hummers of the bike path is what they represent. As you can see in the photo, this perfectly fit Chinese gentleman, wearing sunglasses like a pop star, is being chauffeured by his Filipina maid. And that's the point. People don't buy these because they need them. They'll say, "Oh, it's for shopping." But really it's the local equivalent of owning a limousine. I've watched, disgusted, as two neighbors in Wang Tong, both fit adults who used to ride their own bicycles, stand with impatience burned into their faces, while the maid fetches the tricycle and pulls up in front to let them get on. They can't even be bothered to walk ten paces to where it was parked. They don't care how strenuous it is for their petite maid to deliver them to the pier and pick them up later in the day. They don't care that a trip which takes 5 to 7 minutes on a normal bicycle now takes 15 minutes of hard labor... someone else's hard labor. They aren't bothered by the selfishness of impeding traffic and hogging parking. All they know is that they are Very Important People, too important to use their own legs.

If you live in a place where idiots in SUVs and snobs in Mercedes drive rudely and choke the roads, count yourself lucky that you're not stuck in a rainstorm, just trying to get home, cycling behind a huffing and puffing, creaking and crawling fat-assed tricycle.
All contents © Larry Feign Posted on Wednesday, July 22, 2009