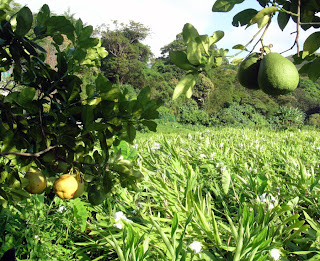 Imagine a right triangle. The right angle sides, on the east and south, are bounded by the Wang Tong River (actually a babbling brook) as it emerges from a razor-cut gap in the hills, cuts a straight path along the foothills, then veers sharp right just as it strikes a line of trees bordering a wetland. The river passes another hill on its way to a mangrove swamp and the sea, leaving Wang Tong behind.

The hypotenuse of the triangle is formed by Butterfly Hill on the northwest. It got its name from the reputed 200 species of butterflies that have been reported on its flanks. Butterfly Hill is densely wooded, its only structures being a few houses at its ankles and the ruins of an old watchtower on its crown. Hong Kongers being notoriously uninterested in any history longer than the 3-year profile of a stock's selling price, no one is exactly sure of the age or even the purpose of the old watchtowers which are found all around Lantau. Some say they pre-date the British, erected by local chieftains to guard against pirates. Others claim they're from the 1930s, built when Lantau was still a backwater as distant as the Moon. The rest of Butterfly Hill is an informal conservation area--one government agency says it is one, while another agency says it isn't. It's home to eagles owls, rare barking deer, the even rarer Romer's Tree Frog, and that Burmese python I mentioned yesterday. I've seen kingfishers darting in and out, presumably to build their nests, as do bulbuls and many other local resident birds.

The majority of the human part of the village is along both sides of the first section of the river, literally Wang Tong's Lower East Side. The Upper West Side, where I live, closer to Butterfly Hill, has only a few houses built before zoning put a limit on development.

Most of Wang Tong Valley is blanketed by an unbroken stretch of ginger fields mixed with tall grasses and broadleaf shrubs. It isn't the kind of ginger you can eat. But, man, its flowers! They're whiter than snow, loose waxy petals which give off a intense spicy fragrance. Twice a year when the ginger is in bloom, its perfume saturates the valley, intoxicating anyone who passes through. This is one of those times of year.

The photo above shows the ginger field in bloom directly behind my house, framed by our pomelo tree, almost ready for harvest.

The valley is also a wildlife haven. There are dozens of insect species I've never seen before in my life. Baby praying mantises often land on your shoulders and dragonflies which look they were painted with blue, red, and purple fluorescent marking pens dart in and out of open windows. Hidden in the brush are turtles, frogs, snakes and skinks, many of whom provide food for the egrets, herons, moorhens, curlews, coucals, grebes and other funny-sounding birds who visit during the day.

The area's main attractions are beyond the village in opposite directions.

If you take the footpath past Butterfly Hill, it leads you up a steep incline, through a gap and into the next valley, which contains a single farmhouse and a forest of bauhinia trees. Another five-minute walk beyond that brings you to the spectacular Silvermine Waterfall and the abandoned silver mine which gives the area its English name.

In the other direction, south of the village, I mentioned a wetland and a mangrove swamp. It's a small mangrove, too small for the government to declare a Coastal Protection Area according to their stubborn regulations, but it's stuffed full of creatures: mudskippers--fish which walk on land, covered by thick coats of slime which serve the same purpose in reverse as air tanks for human divers--fiddler crabs with enlarged right claws, fluorescent blue kingfishers, snowy egrets, Chinese herons, and a rotating population of migratory birds.

Beyond that is Silvermine Beach, a sandy beach framing Silvermine Bay, whose water is, well, if you grew up here like my kids and develop the right antibodies, potentially swimmable.

I'll bring you to some of these places in more detail later. But right now my eye is distracted away from the keyboard and toward the panorama of the ginger field in exuberant bloom outside my window.
All contents © Larry Feign Posted on Friday, July 17, 2009