Feng Shui in my Window 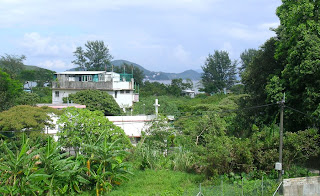 This is the view from the window of my home studio on the top floor of our house. In front of me is a small seldom-used house owned by a church, then the neighbor at #15 and a coastal wetland. Beyond that is Silvermine Bay, with tiny Hei Ling Chau island in the distance. I enjoy watching the fishing boats and ferries coming and going, and at this time of year when the storms all come in from the south-east I sometimes get panoramic, apocalyptic lightning displays.

Many years ago, when we lived in another house in the village, not far from where are now, I had a similar view, though out of a much smaller window. One day I was listening to the radio and they were interviewing one of the most famous feng shui experts in Hong Kong. He said that in Hong Kong, speaking in general terms, the most auspicious location for a room was facing east-south-east with a view overlooking water. I rushed down to the bedroom and searched through the miscellaneous-whatever drawers until I found what I was looking for: a small keychain with a compass. I brought it back up to my studio and checked: exactly east-south-east, overlooking the bay! Well, I couldn't deny that things were going pretty well for me. I had an excellent marriage, two healthy young children, and simply the greatest job anyone could have in the whole world.

Around six months after that radio show, a developer built a new house directly in front of ours, obscuring my lucky view. It was like one sailboat blanketing another: getting in the way of its wind. Two days after officially completing the building, packing up their equipment and clearing out the site, I was unexpectedly fired from my job in the most humiliating way possible--by fax. My firing touched off an enormous scandal which still to this day haunts my life. You betcha, I became a firm believer in feng shui.

Many people treat feng shui an entertaining and harmless superstition, but I'll put my money on it. In fact, I did. We bought the plot of land directly in front of our house so that no one will ever be able to build there and get in the way of our east-south-east sea view.
All contents © Larry Feign Posted on Thursday, July 23, 2009