The News From Wang Tong 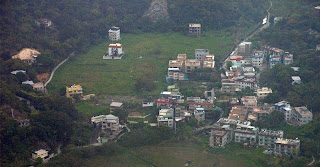 Welcome to Wang Tong, a little village somewhere on the southern end of Lantau Island in the South China Sea. That's most of it in the photo. Wang Tong has between 60 and 75 buildings, depending on your opinion about where the village boundary lies. Only a few are single-family homes. The rest are split into apartments, others are almost permanently vacant, and a few exist as down-market guesthouses for braying packs of teenagers.

How many people live here? I don't think anyone ever counted. Even the government census lumps Wang Tong and its neighboring villages into one broad entity called Mui Wo. But if I had to guess, I would say that the permanent population of our village hovers between 150 and 180.

Wang Tong is no Anatevka, or even Lake Wobegon. You would never go out of your way to visit this place. You can't drive to it; there are no roads! It isn't quite visible from the beach. You might stroll along its edge on your way to the Silvermine Waterfall, but you don't have to. There isn't much to see except a field of wild ginger, a few nice gardens and the one remaining vegetable farm.

So who lives here? Even in a village this tiny there are four distinct populations. Start with the so-called indigenous: descendents of the original, pre-British colonial era, settlers of Lantau Island. Two clans predominate: the Tsangs and the Wans. Then there are the other Chinese residents, people who drifted here to save money or get away from the city. Until around 2005 only a small handful of Caucasian and other non-Chinese people bought or rented homes, in order to have the space that we foreigners seem to need surrounding us. In the past several years, we've seen a small surge of incoming foreigners, including an increasing number of overseas Chinese. And don't forget the Filipinos. Since nearly every household employs a Filipina domestic helper, and a few have gardeners as well, Filipinos might in fact be the largest homogeneous group in Wang Tong.

I've lived in Wang Tong since 1991. My children grew up in its fields and streams and nearby beaches and hills. I truly love this village. I'll tell you more about it in this chronicle.
All contents © Larry Feign Posted on Wednesday, July 15, 2009