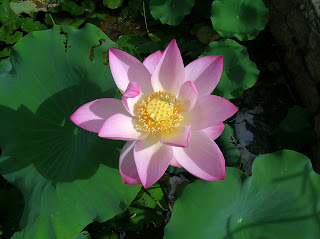 Is it a lotus or a water lily? There's some disagreement over whether Nelumbo nucifera is part of the water lily family of aquatic flowering plants. This particular flower is in our lily pond... make that our lotus pond. It's the sacred flower of Buddhism, which might explain why the pond at the end of our garden is crying out for a Buddha statue. Its roots and seeds are edible, and its stems and leaves are widely used in Chinese medicine.

I'm not the flower fanatic in the family. All I know is it's pretty and seems to know it. Out of the thousands of flowers in our garden, the lotuses seem to almost vocally demand attention, like floral divas. They're at the very end of the garden like the mistress at the head of the table, sticking their long skinny necks up and distracting your eye even at a distance. They're not as colorful as the cartoony bird of paradise, as exotic as the blossom of our dragon fruit, or as flashy as the bushes full of ruby chili peppers. There's something regal about the lotus instead. It commands you to pay attention.

Maybe this haughty sense of majesty intimidated Mr. Tang, on the other side of the village. He had a lotus pond as large as a swimming pool right in his front garden next to the public walkway. It was so big that it still appears on the topographic maps of the village. In the summer it was covered from one end to the other with waxy pink lotuses and floating water lilies. He had carp and a lot of turtles too, who stuck their heads up for air between the lily pads. Talk about Buddhist blessings, he had it in spades. Probably good feng shui too. Then a few years ago he filled it all in and converted his garden into a suburban American-style lawn. Now his grandchildren can run around playing football (soccer) when they visit, but I think he did the whole village a disservice.

My wife gets crazy pleasure from her flowers, and the lotus is the queen of them all. I'm not as nuts, though if they bring us Buddhist good karma, all I can say is, I need all I can get. Long live our lotuses.
All contents © Larry Feign Posted on Wednesday, July 29, 2009