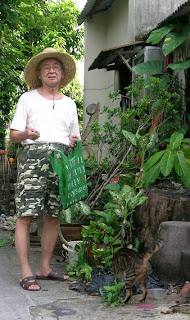 Luk Suk (literally "sixth uncle") and I are friends, but we are divided on a significant point of ideology: cats. He loves them, while I wish they would go away.

Luk Suk is a gentle, kind-hearted old man who lives in a small two-room house on the slope above the east side. His family name is Wong, but everyone calls him Luk Suk (pronounced "look sook"). I don't know a lot about his story. Even when I've asked him, he says little about himself. I don't know where he got the name Uncle Six. He moved to Wang Tong from somewhere else around fifty years ago. He maintains a neat little flower garden outside his home. He sometimes walks up the valley to check the village water tank for problems or vandalism. But his main pleasure in life is communing with cats.

He makes two or three rounds of the village each day, pulling a small trolley filled with plastic bags, which are each stuffed with a mix of rice, meat and other food scraps that he feeds to stray cats. There are several way stations where he's set up bowls and trays. He reaches into a bag and deposits a fistful of morsels into each. The cats of course adore him. No matter where he walks in and around Wang Tong, they come running, rubbing his leg and mewing.

He's been making these daily rounds every day for the 18 years I've lived in this village, and who knows how long before that. You can tell when Luk Suk isn't feeling well: small gangs of feral cats pace around empty feeding bowls, crying all day.

I used to adore cats. Cats were my closest companions as a kid, sharing my room all the way through to adulthood. After I graduated college, my cat followed me back and forth across America several times. It deeply broke my heart when, after I got married, he mysteriously disappeared.

I started changing my mind about cats when we moved to London for two years. Our children were small and we decided to get them a pair of kittens. When the cats started bringing dead birds into the house, naturally we put bells on their collars, but one of them was clever enough to learn how to adapt to the bell, and the killing continued. I read a newspaper article there about a study which found that housecats killed an estimated 275 million small animals each year, including 55 million birds, just in England, Scotland and Wales. In the United States, the number of birds killed by cats every year is in the hundreds of millions. I've never looked at cats the same way since.

Wang Tong Village and all of Lantau Island is a rich habitat, teeming with wildlife. Besides the numerous native birds, we're fortunate to have a mangrove swamp on the edge of the village which attracts seasonal migrating birds. The bushes and footpaths are crawling with long-tailed lizards, skinks and fiddler crabs. Frogs are everywhere. Snakes too, as you know.

If it's a choice between wild birds and reptiles versus domesticated cats, I'll choose the wildlife. Cats don't belong here. I'll tell you about our own battles with stray cats to save generations of bulbuls some other time.

The colonies of feral cats that Luk Suk takes care of don't belong to anyone. A local group of animal lovers occasionally catches them, brings them to the SPCA for desexing, then releases them right where they found them, but enough cats avoid capture that the stray population keeps going up. They argue that Luk Suk's feeding makes it unnecessary for the cats to hunt birds and small animals. I think the feeding just encourages them to sit around breeding like the worst caricature of welfare recipients, meanwhile hunting fresh meat between meals of mostly rice.

I've never spoken to Luk Suk about it. He doesn't even know my feelings. He finds pleasure, meaning and peace with himself by feeding and communing with his beloved cats. That's something I would never want to spoil either.
All contents © Larry Feign Posted on Saturday, August 01, 2009