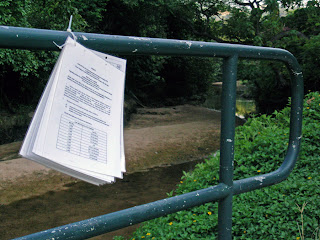 Like a corpse hanging from a noose, this government notice was discovered dangling from the guard rail today. It contained numerous pages and was laminated, which indicated it was a serious notice.

Indeed it was. They want to pave over part of our garden!

That wasn't the only thing mentioned in 14 single-spaced pages of English and Chinese, but to me it was the most significant.

At long last the government intends to bring a sewer system to Wang Tong. This is a good thing. Houses here rely on septic tanks, not all of which are well-maintained. And when you crowd six generations of a family, plus all their cousins and in-laws into a small house, which is pretty common in this part of the world, it can put a strain on a septic system, as can be seen occasionally in the form of mucky, oily filth leeching into the stream. Many houses rely on septic tanks only for their flushing water, so you can usually tell when certain households are doing their laundry or just finished brushing their teeth. In other words, it can get pretty disgusting. The fish and crabs in Wang Tong Stream, not to mention the human children who play in the brackish outflow where the stream crosses the beach, will live longer, healthier lives once the sewers are in.

But they want to slice off a piece of our garden! They'll need to remove a beautiful (and expensive) granite wall and self-designed cast iron sunflower fence. They'll pave over flower beds and adolescent fruit trees near the border. For what? Most likely just for the temporary purpose of allowing machinery through a narrow section of the footpath. This is government, so expecting them to put things back the way they were after the job is done is like asking Godzilla to clean up after himself when he's finished devouring the population of Tokyo.

I'm all for the improvement to the environment the sewerage will bring. But it's depressing that it may happen at the expense of a small but irreplaceable portion of my own environment. I've written a letter of objection and asked for a meeting with the engineers. Please, kind sirs, a stay of execution for our flowers.
All contents © Larry Feign Posted on Friday, August 28, 2009