A Most Expensive Gecko 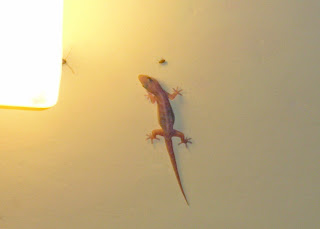 The light above our front gate is like a tapas bar for geckos. It seems that every known insect species on earth congregates there at night, so it isn't surprising to find five or six geckos gathered for an upside-down feast.

They're all over our house as well, on outside walls and within every room. I'm very fond of them. They do a great job of keeping the interior of our house insect-free, amazingly so, considering that we're surrounded by an enormous organic garden and a ginger swamp. Besides, geckos are cute. They pop up everywhere. Just a few minutes ago, a little baby reptilian head appeared on the top of my computer monitor. Its big bulging marble eyes charmed me. But it also has me worried. Here's why:

There is normally a constant breeze in the Wang Tong valley. When we're in the living room we keep the doors and windows wide open (with screens, of course) and with the help of a ceiling fan, we almost never feel the need to use the air conditioner. One particularly hot, breezeless day, my sweat staining the upholstery, we decided to turn on the air conditioner. It hadn't been used for around eight months, so we weren't surprised when, after a few minutes, the air blowing on us still felt warm. Probably it took time to get the freon flowing again through sclerotic copper pipes.

After ten minutes, it was still blowing hot air at us. Obviously something was wrong. The next day I phoned the repair service.

The technician climbed out my daughter's window and spent nearly an hour examining the machinery. The compressor fluid level was fine. The moving parts were all moving like they should. He fetched some special meters to test the wiring and electronics. At least two circuit boards were defective.

"How could this have happened?" I asked him. "We almost never use it."

He also wanted to get to the bottom of it. Was something leaking onto the circuitry? Had something melted in the summer heat? He disassembled more and more of the equipment to see what he could find. After 45 minutes of this, he climbed back in through the window and said he'd discovered the problem.

"What?" I said. I knew that was the Chinese term for lizard, but I didn't get why he'd mentioned it.

The repairman drew a picture of a gecko. Obviously one had made a home, or maybe even a nest, safe from predators, inside the sanctuary of our air conditioning unit. When we'd turned it on, the unfortunate gecko had been instantly fried and short-circuited the boards he'd probably been snuggling between.

The following week a repair crew replaced the circuit boards. Before they left, they handed me the damaged ones. They also gave me a plastic sandwich bag containing the dried corpse of a gecko.

I felt horror at what it must feel like to be curled up, snug and safe, then to suddenly have 240 volts of electricity surge through your body and turn you to toast. I hoped that it hadn't felt any pain.

That was the most expensive gecko I've ever met.

I hope the baby hanging around my computer monitor doesn't try to go for the new world record.
All contents © Larry Feign Posted on Thursday, August 20, 2009