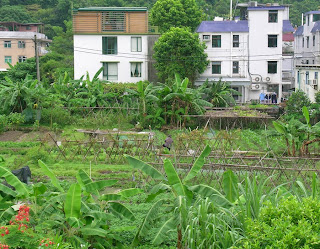 My eyes stung and I felt like spitting to rid my mouth of the tinny chemical taste. What was happening? From time to time you read about unexploded World War Two bombs still being discovered at building site excavations around Hong Kong. Had the crew working on the nearby slope perhaps unearthed an unreported World War One trench warfare site, and accidentally cracked open a can of mustard gas?

No, it was just Ah-Po next door drenching her farm with insecticide.

Her vegetables look gorgeous, and there's a reason for that. She pours insecticide on them by the bucket. This is not hyperbole or figurative speech. She actually pours poison on her plants with a bucket. Sometimes she uses an industrial-sized power sprayer strapped to her back, the kind you might use to paint the sides of a building. No gentle treatment here; she means total war.

By the time I took the photo, the chemical attack was over and she was tying bundles of ginger flowers, which presumably no one will eat.

Every time she sprays, all the bugs take refuge in our organic, pesticide-free garden right next door. We've pointed this out to her, as well as explained that if she raised organic produce, she would be able to sell it for more money. That piqued her interest for all of one afternoon. But old habits die hard.

I just wish that next time she'd warn us, so that I can take the day off to run into town and breathe in some nice fresh bus exhaust instead.
All contents © Larry Feign Posted on Monday, August 31, 2009