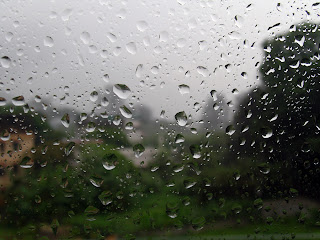 After a morning even hotter than yesterday, the afternoon sky suddenly went dark, the wind arrived like a cannon shot and lightning flashed in the distance. The outer tentacles of the unnamed tropical storm gripped Hong Kong and tossed bolts of lightning directly onto Wang Tong Village.

Before the storm actually reached the village I ran around the house unplugging things. No matter how much our electrician swears that our house is properly grounded, I won't take any chances. In other Wang Tong houses I've lost two fax machines to lightning strikes and a friend of mine had two fried computers in a row. Any time I hear thunder less than ten seconds after seeing a flash, our house goes into lightning drill.

"All computers off!" I shout, usually to responses of "Aww! Why??" Well, if my kids want to risk their computers because they can't tear themselves away from Facebook, it isn't my problem... until they ask me to pay for repairs.

"Because I said so!"

The kids are out this afternoon, so no screaming necessary.

I rush downstairs to disconnect the TV antenna, then pull the phone wire from the back of the broadband modem. Out here in the countryside the phone lines all dangle through the air, often tangled in trees. A direct strike on any telephone pole in the village would wipe out every electronic phone, fax and computer in the valley.

Just in time! A blinding flash, followed two seconds later by rolling thunder, send the dogs into a panic. Let them inside, quick.

Another flash, total white-out, almost instantly followed by a deafening boom. The entire house shakes. An electric flash bursts behind the bookcase on the middle floor, where a fusebox is located. Lamps and appliances go dark. There's a sour burning ozone smell behind the aroma of sugar cane boiling on the stove.

The rain doesn't arrive for another two minutes, then it makes up for lost time. The view through the window is a blur, liquid static across my field of vision.

Fifteen minutes later the worst is over. The arm of the storm has swept past. Dragonflies dart like sparks outside the window. At least the air is cooler now.
All contents © Larry Feign Posted on Monday, August 03, 2009