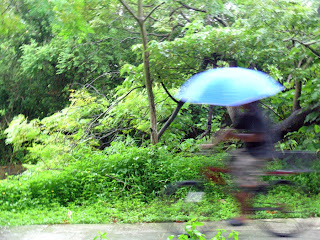 Wang Tong is located between 22°16'14.20" and 22°16'21.60" north latitude, which puts us just south of the Tropic of Cancer. That means three things: heat, humidity and rain. I'll gladly trade in the first two. The rain I don't mind, though we've had an awful lot of it this summer. Tropical Storm Goni is wandering by slowly, like someone peering in a window, while continuing to drench the universe in and around Wang Tong Village.

In this community one thing people never get tired of arguing about is how to avoid getting wet while riding a bike. If you have to ride home, you can wear a vinyl poncho, which inevitably comes unsnapped and blows behind you like a cape, sparing only your shoulders from being dripping wet when you walk in the door. Unless it's gotten caught in the spokes and you limp home with a bruised knee.

Some people ride with one hand while grasping an umbrella in the other, like the poor guy in the photo. It's picturesque, but also the surest way to wreck an umbrella and lose control of your bike at the same time. Two seconds after the picture he nearly had a collision with some urban tourists, who are by definition incompetent and inconsiderate cyclists.

Some hapless people use the rain as an excuse to ride their road-hog tricycles, most of which have canopies. If only rain fell straight down in a tropical storm, then that might work. Tell the rain gods to switch off the wind first.

I've never understood the fear of getting rained on. It's only water. It isn't all that uncomfortable, at least in the warm tropics. We bathe and wash our clothes in water, so what's the harm if our bodies and garments get an unscheduled rinse? I think the struggle against rain comes from a human instinct to master the elements. Getting rained on is not a matter of getting wet, it's being defeated by nature. That's why we so fruitlessly fight it.

The only sure way to avoid getting soaked is to not go out. Or move to the city and stay in covered walkways and subway tunnels. Either way you miss a chance of having a little bit of heaven drip on you.
All contents © Larry Feign Posted on Wednesday, August 05, 2009