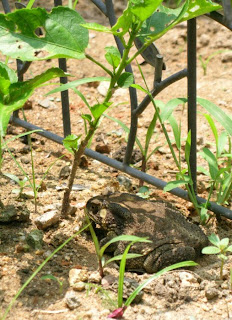 The Hong Kong Observatory announced yesterday that August has been very hot. Well, duh! It's the hottest August on record since 1974. If it gets any hotter, the earth's crust might melt back into magma. They didn't say the last bit, but that's how it feels.

Nobody is outside unless they have to be. Even this frog is desperately avoiding the sun in the perfect-fit shadow of a baby hibiscus.

The whole world of Wang Tong feels lethargic in the heat. Including the plants. Fruit on the trees--papayas, pomelos and sugar apples--haven't grown or shown any signs of changing color for the last couple weeks, as if the trees themselves are exhausted.

Which human ancestor, so greedy for real estate, came up with the idea of living in the unbearable temperature and humidity of the tropics? Which sadist--whose brother was probably a cement merchant--determined that all houses built on Lantau Island should be made from solid concrete, which rather than shielding occupants from the sun, soaks up its rays and redistributes the heat inside like a stone-bake pizza oven?

It's a choice now between the metallic-tasting breeze from an air conditioner, or asking that frog to move aside and share the shade.
All contents © Larry Feign Posted on Saturday, August 29, 2009