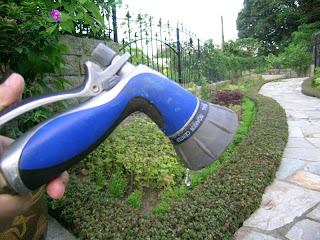 It's been raining so hard and so often that the sky must have used up all its water. That's why there's none left in the garden hose.

Actually, there's a better explanation. We've had torrential rain and lightning storms nearly every day for a month. Sometimes it drops down so hard it feels like hail on your shoulders, and it doesn't stop for hours. Normally tiny mountain streams become gushing torrents, dragging rocks and pebbles and uprooted plants down hillsides. And therein lies the problem.

Wang Tong has two water supplies: one is piped in by the government for drinking. The other is the village's own source of mountain stream water, which is supplied by a small pool halfway up a mountainside. Stream water fills the pool and runs through a mesh filter in the bottom, then into a pipe which supplies the village. Most villagers tap into the pipe for their garden faucets. Some use it for their home's toilet flush water and others, like Luk Suk, use it as their main water supply. Unlike the government supply, it's free.

Most of the time nothing collects in the pool other than some rotten leaves fallen from surrounding trees. But when there's a deluge caused by a heavy rainstorm, sand and silt and pebbles wash down the steep mountain gorge, fill the pool and block the drain with hard, heavy debris. Ironically, after prolonged heavy rain, Wang Tong suffers a water shortage.

It's at times like this when Wang Tong shows its real community spirit...or lack of it. Everyone waits to see who's going to trudge up the mountain with a spade and clear out the reservoir this time. I've done more than my fair share. I guess everyone feels the same as me. Luk Suk is getting a bit too old to do his share any more. Old Mr. Lam used to clear it, since he lived closest. But since he died a few years ago, it's become a waiting game of who can stand it the longest.

Oh, all right, I'll probably give in. It's good village politics when the foreign devil publicly does his bit.

Or maybe I'll wait just one more day and hope someone else gets the blisters...
All contents © Larry Feign Posted on Friday, August 14, 2009