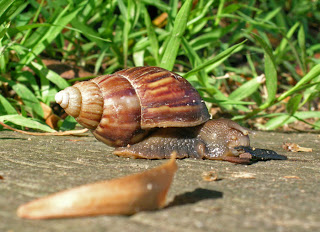 I went out for a walk after breakfast to see what might be stirring in the village. It was already boiling hot: at least 30 degrees (86° F), with humidity so high I expected even rocks to sweat. When I exited the garden gate I was nearly run over as three or four cyclists dashed madly down the footpath, with just minutes left to catch the 8:05 ferry. Once their dinging bells faded in the distance, I found myself alone.

Well, not quite alone. About twenty steps away, in the middle of the path, was this enormous snail, tucking into his--or her (snails are hermaphroditic)--breakfast: a roll of bark from a tree branch. When I say enormous, I mean it. It was about as large as a bar of bath soap, its shell around 5 inches (12 cm) long.

We find a lot of these snails around here. They're definitely not welcome, since they wreak havoc on vegetation. When they turn up in our garden, they get a swift flight through the air into the ginger field. They're called Giant East African Snails (Achatina Fulica), and as you can tell by the name, they're not local. Some people think they were introduced to Hong Kong when they were imported as terrarium pets. More likely they hitched rides around the world in cargo containers. They apparently first arrived here during the Japanese occupation in the 1940s. Brought in as delicacies? No, that would have been the French.

I walked along the stream. The fish were again hiding away from the heat. After walking half the length of the village and encountering no one, not even a bird, and sweating madly, I turned around to go home. The giant snail was still there, finishing off the last bits of its meal. In under five minutes it had devoured a piece of bark as long as its own body.

What should I do with it? Squash it? Throw it in the stream? It could end up in our vegetable patch. It didn't belong in this part of the world. It was an unwelcome foreign intruder...which is probably what some of the indigenous villagers think about me.

That decided it. I left my fellow immigrant in peace.
All contents © Larry Feign Posted on Wednesday, August 26, 2009