Mormons in the Garden 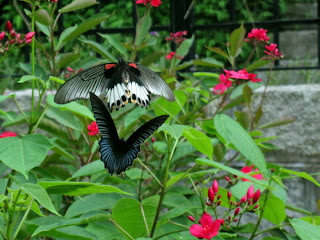 Living next to Butterfly Hill, it isn't surprising that we have a lot of butterflies in the valley. One survey put the number of butterfly species on the hill at 40. Butterfly Hill is 90 percent covered in dense forest and is theoretically a conservation area (government departments differ on this).

Today I took a break in the garden, in between rain bands provided by Tropical Storm Goni (it has a name now) and saw at least five butterfly species, all competing with wasps and bees for spaces on the flowers.

The queen of them all is the Great Mormon, or Papilio memnon. At a distance you might mistake the female for a small bird or a bat. Her wingspan reaches 14 cm (5 1/2 inches). Rather than a demure coquette fluttering from blossom to blossom, the Great Mormon dashes and dives around in the air, through trees and under bushes, like a demented swallow.

It must be their mating season. In the photo, a female--the black-white-and-red one--is playing hard to get with a male--the dark blue one. She was doing a back loop before diving for cover beneath a flowering bush. When she emerged a few seconds later, two other males joined the pursuit. Funny, I'd expect a butterfly called a Great Mormon to have three females chasing a single male.

All four flew around the densely flowered side of our garden for two long minutes of aerial courtship. Talk about a femme fatale! One male dropped out. The three remaining butterflies landed on a bed of flowers, only to be chased off by irritated wasps. I ran too when the wasps rose in a defensive swarm. When I was safely away I watched the female, now down to a single suitor, soar over the fence and back toward the sanctuary of Butterfly Hill.

The rain started coming down again in big fat drops. I ran to my own sanctuary inside the cocoon of my house.
All contents © Larry Feign Posted on Tuesday, August 04, 2009