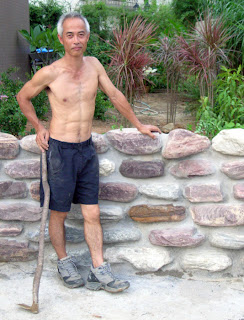 Mr. Mak just finished putting in a garden for a house on the east side of the village. He built the wall and did the landscaping.

His own garden is not a great advertisement for his services. He lives in one of the tiny old-style village houses overlooking the Wang Tong Stream. Clipped to his chain link fence is a hand-scrawled sign on a piece of driftwood, in Chinese and English:

Lantau Horticultural Society
Garden Design
Inside the fence is a scattered hodge-podge of plants and short trees, some in pots and some in the ground. The misnamed Horticultural Society which he presides over is really a bonsai club. Once or twice a year the group puts on a public exhibit of their miniature trees and fantasy Chinese landscapes, many of which are elaborately beautiful. I wish I could say the same for Mak's own garden. He's done a nice job for his client, though, a foreigner who bought the house last year.

Mr. Mak grew up in Wang Tong, the son of his father's Hong Kong wife (the China wife still lived across the border in Guangdong). When Mak was seven, his father ran off to South Africa to work in a Chinese restaurant, and married his third wife there. Mak and his two brothers stayed behind with their mother in Wang Tong, living off the meager remittances his father sent back.

When he was seven his mother died, and his father sent his South African wife (of course she was Chinese) back to Lantau to care for the children. Several years later his father returned, with enough savings to buy land around Mui Wo and provide a more comfortable life for his family.

I knew his father, a jovial old guy who always sat outside his little pink house overlooking the stream and handed Chinese candy to any kid who walked past.

I was surprised when the president of the Lantau Horticultural Society cut down the entire lovely bamboo grove next to his father's house right after he died. He must have his reasons. Some Chinese believe hollow plants like bamboo provide refuge for ghosts. Maybe he didn't want other ghosts hanging around his dad's place like spirit vagrants. Or maybe the bamboo was just too wild and unkempt for a bonsai enthusiast. We never discuss it. Which ever way you look at it, he's a gardener, and gardeners deserve respect.
All contents © Larry Feign Posted on Saturday, August 08, 2009