You've got mail...if you're lucky 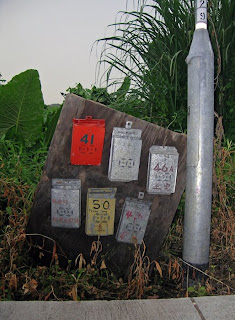 This is how Wang Tong people collect their mail. You can buy your own mailbox--cheap!--at the local hardware shop. One size fits all.

If you live near one of the main footpaths you'll nail it up next to your front entrance. But people who live way uphill along narrow, winding lanes--in other words, where the postman won't bother--either hammer their mailbox to a tree near the bottom of the path or, in this case of neighborhood solidarity, find a plank of discarded plywood large enough to accomodate the entire block.

Some people paint theirs, but why bother? On a rainy day your letters are going to more resemble wood pulp than the bank statement or property tax bill they started out as.

Notice that Number 50 says "Mang Tong". Several houses in the village are officially listed that way. Where did the "Mang" come from? The Chinese name is clearly pronounced Wang Tong. My best guess is that someone not very proficient in English had to fill out a government form and wrote the W upside-down. Then others even less proficient copied him. (If you think that's funny, and you don't know Chinese, imagine having to fill out a written form in Chinese characters from memory.)

Our current house was originally listed as Mang Tong, so I did what I thought was the right thing and contacted the Survey and Mapping Department, explained the situation and convinced them to change it. They were supposed to send notices about the change to all the relevant authorities, but those relevant authorities must all have mailboxes nailed to trees, even in the city, and the notices were probably delivered during a rainstorm.

The Water Department refused to connect our water, since the existing water meter was registered in Mang Tong, but now my property tax bill, used as proof of ownership, showed Wang Tong. It took three angry months before we got the water connected. The telephone company claimed that our location was still listed in their records as Mang Tong. But since I'd written Wang Tong on the application, the installation crew assumed I meant another village on Lantau Island, also named Wang Tong, accessible only by a 40-minute hike on an unpaved trail. The phone company men called me from there, out of breath. It took nearly a year to get all the various addresses to match.

Now you understand all the reasons why I have my mail addressed to a post office box, the waterproof kind, inside the post office.
All contents © Larry Feign Posted on Sunday, August 23, 2009