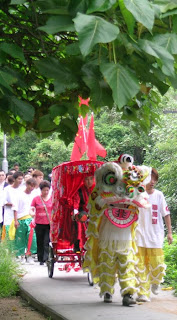 Mr. and Mrs. Suen's son is getting married. I was reminded of this when the pounding of drums reverberated around the valley and put an end to my attempted late lie-in. Peering through the curtains I saw the procession on the other side of the village. I quickly dressed and ran outside.

On the morning of a Chinese wedding, the bride is delivered to the groom's family obscured from view inside a covered sedan chair, preceded by a colorful parade of waving banners, a company of drummers and, in this case, a dancing lion. Traditionally the sedan chair is carried on the shoulders of four strong bearers. In the city nowadays they tend instead toward ostentatious German limousines. But this was the first time I'd ever seen a tricycle serve as a sedan chair. They did a gorgeous job outfitting the trike and, in a small nod to western tradition, it pulled two trails of cans in back.

The procession reached the Suens' home at the northeast end of the village, made their formal introductions, then went back the way they came, flags waving and drums pounding, bringing the bride to wait for the next event of the day, a mid-day barbecue banquet, to which my wife and I were invited. Most of the long-term village residents were there. It was casual by Chinese wedding standards; I was the only one wearing a tie. Ah-Po was seated at the VIP table, across from Wang Tong's Dear Leader, Mr. Wong. We were seated with other neighbors, and we soaked up more village gossip (and traded some of our own) in an hour than we normally learned in three months.

I suppose the main pomp was reserved for that evening in the city, where the ceremony took place followed by a formal traditional wedding dinner banquet.

It's been quite a ceremonial weekend in Wang Tong. First, the pathways lined with red flags for China National Day, then the lanterns and moon-gazing of the Mid-Autumn Moon Festival, and now the wedding. How long will it take the village to recover from all this excitement? Well, people here are pragmatic. Tomorrow it's sure to be back to quiet as usual. 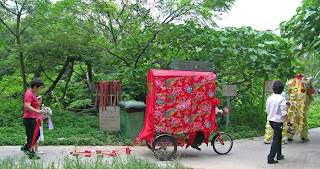