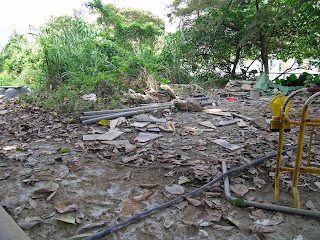 One of Hong Kong's basic laws of nature is: Any open green space is just a temporary absence of concrete.

You see this law in action where they're reinforcing (meaning: pouring a concrete shell over) the hillside around #1 Wang Tong. They're doing a neat and careful job for their client. Meanwhile, all construction debris, broken parts and leftover concrete are deposited on the undeveloped lot just across the footpath. The area in the photo was overgrown with prickly bushes, small trees and broadleaf plants just two months ago. Its current condition will likely remain until the sun implodes into a white dwarf and the earth is sucked out of its orbit.

When we moved into our first rented house in the village, we found rusted winching equipment, a cement mixer and metal pipes which had been left in the garden when the house was built 35 years before. Numerous people had lived in the house between then and when we moved in, yet no one had bothered to move it. When we gathered some strong guys to help us carry the heavy debris to the garbage collection area, neighbors remarked out loud: "Why bother? Why don't you just leave it there?"

Today I stopped one of the slope workers as he tossed lighter bits of metal and plastic trash deeper into the bushes at the end of the lot. I pointed to the public garbage bin five steps to his left. He looked at the bin as if he hadn't noticed it in all the six weeks he'd been working there, and thanked me for pointing this out. But the expression on his and his colleagues' faces was "What's the big deal? It's just an empty lot and useless plants." An hour later I passed by again. The metal and plastic were gone. I checked inside the garbage bin. It was empty. But the bushes were decorated with wire mesh clippings and plastic bags that were too lightweight to sink through.

Chinese villagers and laborers have a pragmatic attitude toward life that is mostly quite admirable. Am I being a cultural chauvinist for thinking that sometimes pragmatism can be truly, horribly ugly?
All contents © Larry Feign Posted on Saturday, October 24, 2009