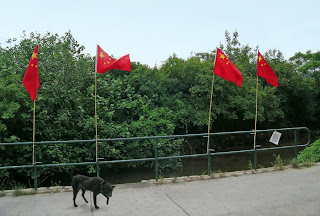 October 1 was the sixtieth anniversary of the founding of the People's Republic of China. There weren't any particular ceremonies to mark this event in Wang Tong, other than a few national flags on bamboo staffs fastened to the guard rails, presumably by our Dear Leader Mr. Wong. The flags are still there, a week after they were put up, and nobody seems to be in a particular hurry to remove them. Maybe they're meant to keep aflame the lingering afterglow of patriotic fervor.

You won't find much of that in Wang Tong. That isn't out of disrespect for the central government or the Communist Party, but because Lantau people's feelings have always ranged from total indifference to slight hostility toward anyone who claims to rule from a distance. The ruins of our stone watchtower on top of Butterfly Hill, built not by government but by a local clan, attest to people's long-standing determination to keep out intruders. In fact, this area has long been a place of refuge and resistance.

In 1277 the nine-year-old Emperor Duanzong, along with his six-year-old brother who succeeded him a year later as the last emperor of the Song Dynasty, fled to Mui Wo when the Mongols conquered China. No one has uncovered any artifacts or knows exactly where they stayed, but it might very well have been at Wang Tong, the fertile V-shaped valley at the end of the bay, with ample fresh water and easily defensible mountain slopes on both sides.

Lantau natives grumbled when the British took over in 1898 and were openly resentful when in the 1950s the government imposed modernity in the form of the island's first road, which nipped Wang Tong's importance as the starting point of the principal footpath across the island.

During World War Two, Mui Wo was one of the main centers of resistance against the Japanese occupiers, which resulted in a mass execution of 60 local men, including several Wang Tong residents, on the nearby beach. Mr. Lam, who was our village chief until he died a few years ago, was one of those lined up to receive a bullet, until he took a chance to slip away through the mangrove swamp.

The latest act of resistance happened on the night of the glorious handover of Hong Kong to China in 1997. Aside from some protests near the ceremony in the city, the only act of defiance anywhere within newly-Chinese Hong Kong was the desecration of several national flags strapped to a footbridge half-way between Wang Tong and the ferry pier.

There's no threat that these flags will be vandalized, except perhaps by birds. Nor will many people notice when they're taken down. If one day they're replaced by the symbols of some new, intangible, faraway dynasty, people here will probably just shrug their shoulders and go about their business as usual.
All contents © Larry Feign Posted on Tuesday, October 06, 2009