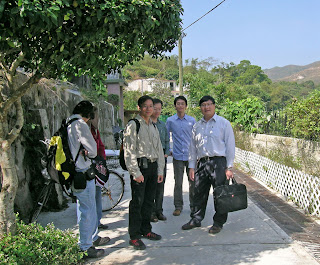 Yet another visit from a government posse to talk sewers and flowers. I'm starting to consider these guys part of the family.

This time they brought a detailed survey map and diagrams to pinpoint exactly where they'll trample the flower garden that we planted while they install sewer pipes. Not that we have any leverage, since the flower patch in question is on a narrow strip of public land outside our garden wall. We even put in a white trellis fence to protect it from dog poop and unskilled, careening cyclists. By law they could have fined us for illegal fencing of government land. On the other hand, we own a piece of the public footpath further down (not near the flower garden, unfortunately) and, although they plan to take it from us by right of eminent domain, I could throw a cog in their production schedule by submitting a series of objections.

So they promised me an official memo, which limits how much of the flower garden they'll wreck, and states that it will be restored afterwards to pristine dirt - no concrete - though we'll have to do the replanting. In return they want me to withdraw my objection to usurping our sliver of land intersecting the footpath. Could be worse. They could be bastards about it instead, prosecute me, confiscate a substantial piece of our garden, and spew concrete right and left. Instead they're counting buttercups.

I find it rather charming - hopeful, in fact - that this government - which is preparing to wreck a huge green swathe of the New Territories and raze an entire village to put in a useless railroad to nowhere, and is about to devastate the remaining pink dolphin habitat, destroy a pristine area of Lantau coastline, and exacerbate air pollution throughout the Pearl River estuary, to build a Pharoah's wet dream of a bridge that will lose money forever - this same government is going out of its way to negotiate over a tiny patch of flowers in a little island village. There is some humanity at work in this world. Maybe not enough to do much good on a grand scale. But here in Wang Tong Village, a little humanity is all we ask.
All contents © Larry Feign Posted on Monday, November 30, 2009