The Art of the Scarecrow 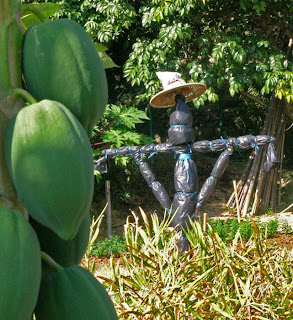 While Ah-Po uses the anti-Disney approach of a twisted Magic Kingdom to keep the birds away, the two other significant vegetable gardens in Wang Tong--Mr. Tam's and ours--employ more classical scarecrows. Though Mr. Tam's might be better described as post-modern or neo-primitive. His is an almost Jungian archetype of the human figure: four sticks wrapped in plastic garbage bags, with a little stuffing, and topped with a hat. The fact that it works is living proof that birds have a Gestalt perception of reality, and therefore might appreciate modern art more than I do. 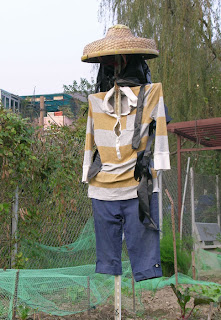 Our scarecrow, on the other hand, is more contemporary pop style, all clean lines, bold vectors, and solid forms. Whatever, it fooled our dog. When he first saw the figure from across the garden, he barked at it as if it was an intruder. My wife had to walk over and put her arm around the scarecrow to reassure him that this was a friend. Unfortunately our Golden Retriever, who is not always the brightest candle in the menorah, sometimes treats new friends with excess affection...by humping them. He's barred from the vegetable garden.

I hope the birds continue their sophisticated interpretations of Mr. Tam's and our sculptural masterpieces, so that we non-abstract humans can all look forward to some hole-free cabbage and choi sum.
All contents © Larry Feign Posted on Sunday, November 29, 2009