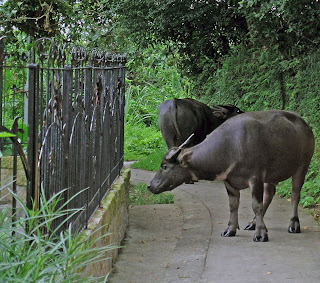 The water buffaloes are back. Though their timing might have been a little better. My wife nearly missed the morning ferry because, as you can see, they didn't leave much room to squeeze past with a bicycle. A few dings of her bell, a couple friendly calls of "Psshh!" and the commotion of me running up behind her, wiping the humidity from the camera lens with my shirttail, convinced them to make a slow turn and regally sashay into the field behind the fence to the left. Everyone was happy: my wife made the ferry and the buffaloes discovered enough munchies to keep them occupied for the next half hour.

Not everyone likes the buffaloes. Some old-timers consider them a nuisance, detritus from a farming existence long past. Many of the garden fences in the village are there not to keep out human intruders, but to prevent buffaloes from grazing on their marigolds. More ominously, and maddeningly stupid, is the belief of our village leadership that water buffaloes, the most docile creatures you'll ever meet--which make even dairy cows seem like grizzly bears in comparison--are dangerous and frighten away tourists. A couple years ago our village Dear Leader arranged with the government to pack them into trucks and relocate them to some distant spot in the mainland New Territories. Most of the animals died in the process, from nothing more than the stress of the move, including the family of three which lived semi-permanently in the field behind our house. Many of us felt like making Dear Leader join them in heaven, a plan we called off when we realized he'd go to the other place.

Now, after several years of being left alone, the feral herds on the other side of Lantau Island have spread out and started filling the vacuum left by their departed cousins. Some mornings we've seen as many as six of these huge animals walking along the beach or swimming in the shallows. Now they're rediscovering Wang Tong Valley, with its rich pickings in the ginger fields.

Most people I know either accept the water buffaloes with a shrug or outright love them. Count my wife and me among the latter. Not just for the pastoral charm they add to the district, but for more practical, selfish reasons. Their poop is the best garden fertilizer on earth, lots better than Miracle Gro. We hope they keep coming back and leave plenty of souvenirs, as long as they allow a bit of room for anxious commuters to reach the ferry.
All contents © Larry Feign Posted on Tuesday, June 15, 2010