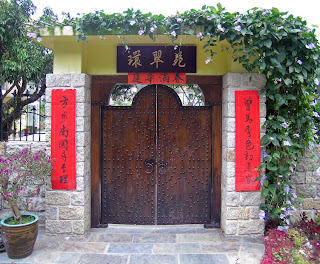 Wang Tong welcomed the Year of the Tiger at midnight with a barrage of firecrackers, followed by around an hour of barking from the frightened village dogs. Maybe they were especially upset because it's a cat year. More likely they were concerned for their own safety. A few years ago one of our dogs was so terrified by a New Year firecracker display during a walk to the beach that she ran away and didn't come back that night, or the next or the one after that. We were sure she would never return. She's black, and black dogs are a favorite New Year delicacy in traditional Chinese communities. Up until maybe ten years ago we were sure we heard the screams of puppies being readied for the cooking pot at this time of year in all the local villages. We walked for miles every day searching for our lost dog, asking every old-timer we met if they'd seen a black dog with such-and-such markings. The unspoken message was: "If you took her, give her back, preferably in one unbarbecued piece." Every one of them replied, "Oh, don't worry; nobody eats dogs for New Year anymore." Fortunately, they were right. Our wayward mutt showed up at the gate a week later as if nothing had happened.

The red banners on our gate were composed and painted for us by a well-known calligrapher from Cheung Chau, a neighboring island. As any Chinese person can tell, my wife's and my Chinese names are incorporated into the auspicious phrase (a tradition I never heard of until yesterday!). This is apparently a particularly lovely and meaningful piece of original Chinese verse, which is apparently impossible to render into English. Vaguely, approximately, it says: (left) "Stepping forth throughout the southern realm in search of truth..." (right) "...beauty and truthfulness radiate from your being." Or something like that. Anyway, it's good.