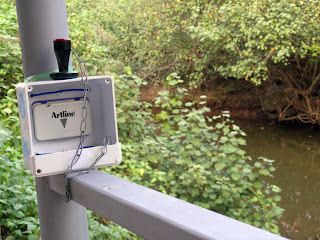 In 1962 the restaurant on top of the hill behind the village shut down, signaling the nail in the coffin of the Cross-Lantau Footpath, once the main thoroughfare between south and north, but seldom used since the opening of the South Lantau Road in the late 1950s. Wang Tong pretty much fell off the map and has nestled in comfortable obscurity ever since.

Sometime in the past week a couple of plastic boxes mysteriously appeared, each containing an ink pad and a rubber stamp. One is attached to a pole next to the ruins of the old restaurant gate; the other is fastened to the railing of the late Mr. Mak's sitting area across from his vacant house, overlooking the stream. I mean, river.

I tried the one at Mr. Mak's place. Now I can finally prove that I've seen the Wang Tong River. In Chinese it's more specific: "Wang Tong River/Mangroves". Though I can't tell whether the illustration 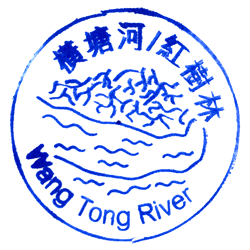 is meant to be charred trees or mangled human bodies. Either way, perhaps the drawing is a not-so-subtle suggestion that raw nature is something ghastly, and wouldn't a housing development with proper landscaping better suit the view. If our village chief was the one behind these stamps, then I wouldn't be surprised if that's his intention.

I assume these are part of a campaign in which visitors are handed little Mui Wo passports and encouraged to run around collecting every chop in a scavenger hunt approach to tourism. Now people can properly "do" Lantau Island rather than simply walking around experiencing it. By approximating a shopping experience, the natural environment can be made palatable to Hong Kong city people.

I suppose if it causes visitors to stop just long enough to notice an actual river with real fish in it and some trees in which you can sometimes see pretty birds, in between the usual leaping off the ferry and rushing to the concrete barbecue pit outside their concrete holiday flat, then it's a good thing.

I just hope I don't find one of these chops outside my gate, saying "Big nose gwailo's house."
All contents © Larry Feign Posted on Tuesday, December 01, 2009