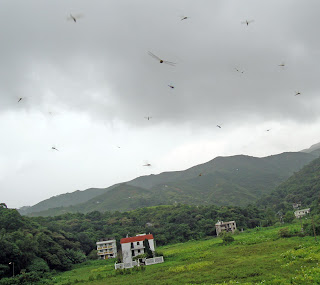 Only beauty prevails in this world. I resolve, in my own small way, to fight against that. From now on, I will be more tolerant toward wasps and lessen my regard for dragonflies.
All contents © Larry Feign Posted on Wednesday, November 10, 2010 3 comments: 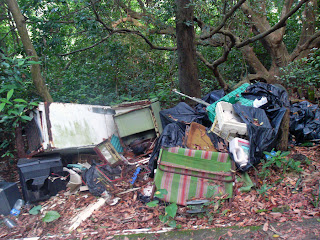 "I've never seen so much garbage in my life!"

That was my mother's first response on her visit to Wang Tong a number of years ago. She'd envisioned it, from my letters and phone calls, as a picturesque rural idyll nestling in the arms of butterfly-covered hills and peopled by the Chinese equivalent of hobbits.

Until my mother's remark, it had never registered in my brain what a load of nonsense that was. Entering the village on foot, one passes a crumbling shack with a missing wall, stacked to the ceiling--no, that sounds too tidy--engorged with broken bottles, crumbling Styrofoam, rotten plywood, leprous cardboard boxes, corroded moon cake tins, and globs and pustules of unidentifiable debris that had probably been decaying there since the Tang Dynasty.

A few steps later you pass a "garden" of potted plants perched on overturned milk crates lurking behind a fence made from shreds of corrugated iron and chicken wire leaning against barbecue forks and umbrella skeletons planted in the ground, with empty LP gas canisters lending support.

I had walked past these places a thousand times, and never noticed. That's because when you live in a rural Chinese village, you develop special filters over your eyes which paint out the garbage. So when a neighbor, a relative newcomer to the village, suggested we organize a community cleanup day, I was skeptical.

"There isn't that much to clean up," I said.

"What about that nine-foot-tall cement mixer sitting there rusting in the center of the village for the past three years?"

"And those decomposed bicycles over there which probably haven't been ridden since the Japanese occupation."

"Hm." I blinked hard. Those garbage eye filters do a magnificent job. I should figure out how to manufacture them.

A group of us put up posters about the clean-up day, sent e-mails, slid notices into letterboxes and spoke to everyone we met on the footpaths. Obviously those same eye filters also apply to colorful notices affixed to lamp posts. Expressions of support were muted.

On the appointed day we laid out food and drink, cotton gloves and jumbo black garbage bags. The old-time villagers walked past as if their eye filters erased us from view. In the end, a dozen or so people showed up.

When you deliberately remove the filters from your eyes and search for trash, our village turns out to be a goldmine...or is that a cesspit? I'm amazed at how many industrial-sized rubbish bags one can fill with discarded drink boxes in just an hour. It's incredible how many toothless brooms, twisted bicycle wheels, 3½-legged chairs and sun-melted boots are strewn between buildings and along stream banks.

Most of the "locals"--families who have lived here for generations--watched with detached humor as these strange people spent a perfectly good horse racing day picking up litter. One resident was less amused when the mountains of trash in front of her door began to disappear. She tolerated the removal of a chest-high mound of broken Styrofoam from the stolen supermarket trolley chained to her gate. She muttered while her collection of maggot-infested plywood scraps vanished into black bags. But the cracked plastic bucket lid was the final straw. She grabbed it from my friend's hands and shooed us away.

A convoy of hand trolleys moved back and forth to the public rubbish collection facility half a kilometer from the village. Within three hours, six enormous dumpsters were filled to overflowing. Meanwhile, sinister pro-garbage forces alerted the authorities. As I wheeled in the final load, a man in blue uniform, silver kitsch attached to his shoulders, confronted me.

"Is this rubbish from Wang Tong Village?"

Rubbish? What rubbish? I was tempted to say. Wasn't he wearing his garbage eye filters? Instead I confessed: "Yes. Who are you?"

"Environmental Hygiene Department. You're not authorized to drop this here. This collection point is only for household rubbish."

"This is household rubbish," I said. "Which your department hasn't cleaned up for the past twenty-five years."

He stood his ground until I stepped closer. I must have smelled as awful as I looked. He backed away and closed his mouth, probably for fear of whatever was staining my shirt leaping into his nearest orifice.

The following day my wife was chatting with Ah-Po, the village's elderly sole remaining farmer, who gave a thumbs-up to the cleaning effort. So did Luk Suk, the old man who feeds the stray cats. Most others said nothing.

In the end, did it matter that we cleaned up? That we'd removed hundreds of pounds of debris which didn't exist in people’s consciousness? We may as well have played charades, carrying away bags of air. Even I don't notice the difference; that's how powerful my filters are.

Yet it was, strangely, fun. An anti-garbage insurrection that worked.

Next time my mother visits and complains about the trash, at least I'll know she's talking about my blog.

An expanded version of this piece appeared in Culture Magazine.
All contents © Larry Feign Posted on Sunday, November 07, 2010 2 comments: